Brooklyn May Be Cool, But The Coolest Brooklyn Linen Service Isn’t In Brooklyn

Brooklyn is known worldwide as the coolest part of New York. It has its’ various areas such as Bushwick which is known for its’ street art, and Park Slope with its’ tree-lined streets and wonderful brownstone housing. Then there is Williamsburg on the waterfront which has condos that have risen exponentially since the housing market recovered.There is every kind of cuisine that you could imagine in Williamsburg, and you can get some great views of Manhattan from the top floor of the William Vale Hotel. You can even become a dumbo 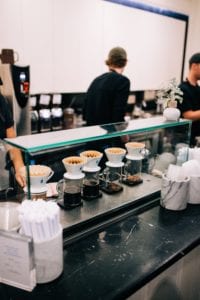 by staying in the DUMBO area – Down Under the Manhattan Bridge Overpass – that is also connected to Manhattan by the Brooklyn Bridge.

Aah, so what if you own one of the many restaurants or cafes or bars that are prevalent in Brooklyn and you want the coolest and best Brooklyn NY linen service?

Well, as it happens, that is not in Brooklyn. That’s us – Stamford Uniform & Linen – and we are not based in Brooklyn. We’re over in Stamford, CT.

You may ask why we’re not in Brooklyn, and the simple reason is that – as a business owner in Brooklyn you know only too well – the rents are astronomical. Certainly, we could have based our business in Brooklyn so that we were only just around the corner from you, but we would have to increase our prices by 50% in order to cover the rent, and we felt sure that you wouldn’t want that.

So we are actually in Stamford, but that really doesn’t matter because we deliver to Brooklyn every day. We are still the best Brooklyn NY linen service, so why should you worry where we are based? All you need to know is that your linen will arrive on time every time and that you still get an extremely competitive price compared with the Aramark’s and Cintas’s of this world.

Even better, because we are not one of the giants, we CARE. We know just how important it is for your linens and uniforms to arrive on time, seamlessly, every week or however often you want them. You can’t run your restaurant, hotel, bar, or even casino, without all your uniforms and linens being immaculate, but it is also something you should never have to worry about. It should just happen, in the same way that the sun rises every morning, even if you can’t see it: you know that it is there.

It’s the same with us. The best Brooklyn NY linen service should just “happen” and at Stamford Uniform & Linen we make sure that it does.